At the recent Let's Test Oz conference, James Bach presented a model of the context driven testing community. His diagram showed the community split across three levels of engagement where an "inner circle" contained those capable of deep intellectual exchange; committed innovators and philosophers. 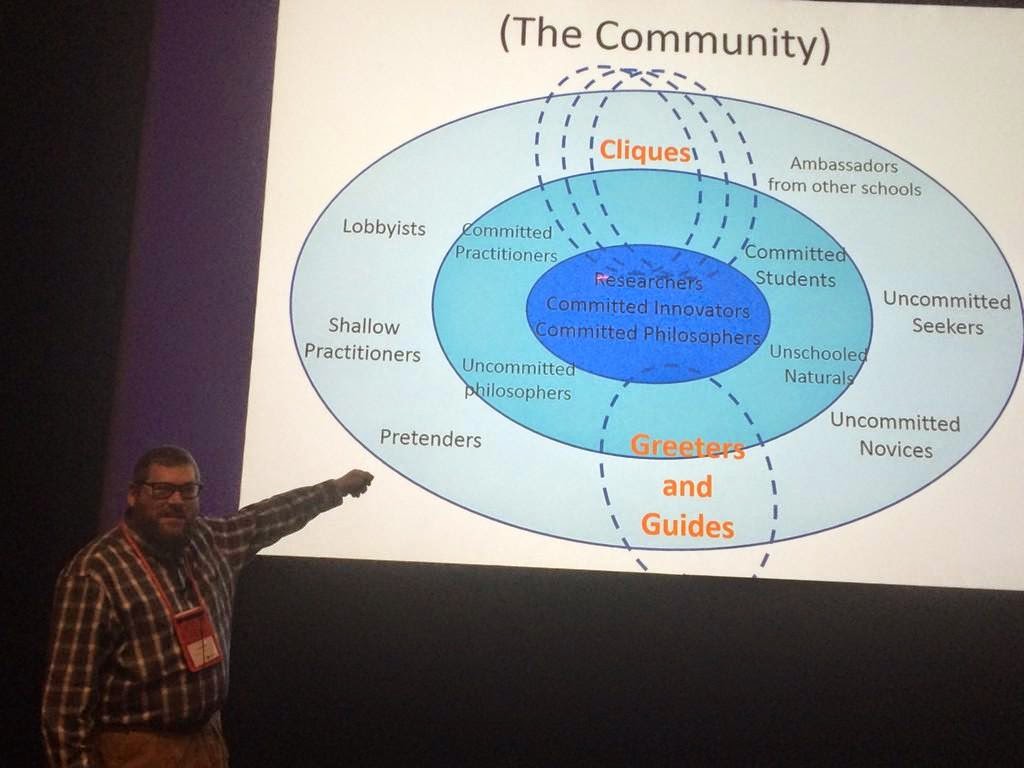 James talked about the community in his signature blunt manner, with straightforward language of cliques, pretenders and lobbyists. He assigned the task of niceties to a greeter, the friendly face of welcome, and coupled these people with guides, who identify and elevate people with potential.

James spoke plainly of an exclusive and elitist culture; by definition 'a select group that is superior in terms of ability or qualities to the rest of a group or society'. I believe that James is comfortable in this type of environment, which is similar to the way that he described the ISST on Twitter earlier this year:

@badbud65 I like exclusivity. I want to exclude people who aren't serious enough. It's okay if you don't like that. You can have YOUR club.
— James Marcus Bach (@jamesmarcusbach) June 14, 2014


My concern is that this rhetoric of exclusion and elitism creates the impression that the context driven testing community is actually a crowd, a commotion, or even a cult.

I believe the community has grown beyond a central clique. I would like to see it represented in a more inclusive way. I see a group of people that are interested in furthering their professional skills; where intent rather than commitment is the ticket to entry.

As such, I'd like to see us adopt an inclusive model: 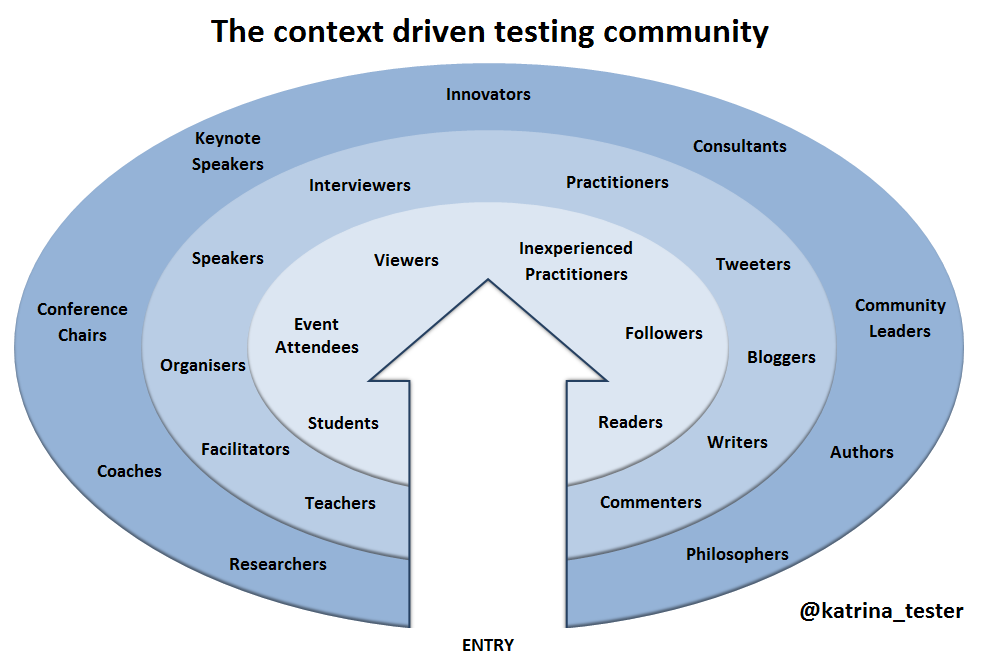 If it looks a bit like I turned things inside out, then you're on the right track. Let me explain.

Someone with no knowledge of context driven testing is likely to encounter a leader of the community first. These are the people with the greatest reputation and professional presence. To a newcomer, these leaders may appear to be offering a lone dissenting opinion.

Consequently, the leaders of the community are not hidden at its center. They are the public face of context driven testing, and most likely to be approached by those who are eager to learn more. I am certain that James is dealing with more enquiries about context driven testing every day than I am!

Rather than expecting a greeter to welcome people, a path should be marked so that anyone in the community can simply direct the newcomers to this route. I believe there are a common set of first steps that any person with an intent to learn more about context driven testing may take. These should be known and accessible.

This model suggests six ways that people become involved with the community:


Newcomers should feel from the very beginning that they have walked into the middle of an inclusive environment. Rather than joining the outer edge of an intellectual clique, they are in the midst of a sphere of possibility. This model offers clarity in the growth and progression that is possible within the context driven testing community.

Commitment and reputation are implicit in the layers of the model. From the center, where people are consumers of information, a person may progress to participating in the community with an active voice.

Contribution is naturally associated with challenge, as by expressing an opinion there's a chance that others will disagree with it. The community ethos is that "no one is entitled to an unchallenged opinion". I simply suggest we move the challenge from our doormat and place it at a point where people are better prepared to respond appropriately.


Finally, the strength of the community is wider than researchers, philosophers, and innovators. Those who are truly committed will naturally aspire to the highest levels, but in a variety of contexts. There are many opportunities, and most of those who operate at this level will happily assist others that want to develop as leaders.

The context driven testing community should articulate the ways in which people can join, market the opportunities for personal development, and encourage newcomers to grow the craft. Creating an inclusive model of the community is a first step in demonstrating the nature of a group that has grown beyond an elite club.

Posted by Katrina Clokie at 21:26
Email ThisBlogThis!Share to TwitterShare to FacebookShare to Pinterest
Labels: Community