How do you create a friendly conference?

One of the things that really impressed me about TestBash a few weeks ago was the warm and friendly tone of the event. I haven't been alone in my remarks on the environment created by Rosie Sherry, Vernon Richards and others.

As a conference organiser, I've been thinking a lot about what made each attendee feel this way. What were the specific actions that made such a noticeable difference when compared to other events. Here are five things that I've identified, which I'm hoping to try at the next event that I run.

Rosie sent an email per day to TestBash attendees in the week leading up to the event. These included the schedules for the workshops and conference, details of associated MeetUp events, invites to a slack channel, social media hashtags, information for a book swap, and a set of behavioural requests.

These emails created a sense of hype and expectation. They got everyone on the same page about the logistics of the event. They allowed people to start interacting online prior to the event itself, if they wished to do so.

These emails also served as the foundation for the community focus of the conference itself. In particular, here are the six things that Rosie asked from attendees in one of her pre-event messages:

This clearly set expectations for behaviour prior to the event.

The first task after registration on conference day was to create your own name tag using very large Ministry of Testing speech bubbles and a permanent marker. The name tags were handwritten. You could choose how to present yourself to others at the conference. First name only, full name or nickname. With or without social media details.

The name tags were large and colourful, which made them easy to locate on a person and easy to read. Though they clearly incorporated the Ministry of Testing brand, they didn't feel corporate. The variety of handwriting on display made something that is normally staid into something that felt informal and fun.

The name tags put a little piece of each personality on display. 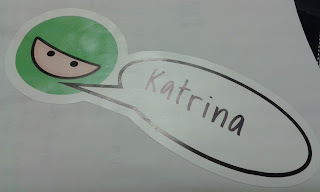 As the host of the day, Vernon Richards did a great job at specifically reminding people to interact with those who they didn't know. He reiterated the TestBash ethos from the pre-event emails that "No Tester Stands Alone".

This expectation was set at the start in his opening remarks and we were prompted of it prior to each break. Many of the people that I met were attending as the only tester from their company, yet I rarely encountered anyone by themselves.

Vernon demonstrated that you don't have to be afraid to remind people to be friendly.

I had never been to a single track conference before. I was really amazed by how different it felt to be part of a large group of people who were all experiencing the same set of speakers. Having over 200 people in one place, focusing on one thing, for an entire day, creates a vibe in itself.

I also found that it changed the type of conversations I had in the breaks. Often at conferences the exchanges over tea and coffee are about what each person listened to during the last session. You'll hear snippets and impressions without really understanding what the other presentation was about. At TestBash we had all heard the same topics, so we had deeper conversations about the ideas, what could work in our own organisations, the doubts that we had, etc.

A set of shared experiences can offer opportunity to explore further together.

Though they were located in a pub, the evening invitations weren't focused on drinking. They instead put emphasis on connecting with other testers. The invitations were open, inclusive, and there was room for everyone, even if it was sometimes slightly crowded!

By keeping those who wanted to socialise in one place, no one felt any fear of missing out. People were really present at these events instead of occupying social media in search of what else was happening.

There was a huge amount of support for people to connect outside of the event itself.


I'm hoping that these five ideas will help bring a little bit of the TestBash magic to my next testing event, and perhaps yours too?

Use your stand up to make testing visible

Imagine that you're a tester in an agile stand up meeting with your development team. You have all gathered around your visual management board, each person is sharing an update and it's your turn to speak.

"Yesterday I tested story 19574 and didn't find any bugs." you say, moving that story to Done.

"There's nothing blocking me at the moment, so that's it." you finish.

Now consider whether, based on the information you've just provided, anyone in your development team actually understands what you've done and what you're planning to do.

If you were to ask them, they might say that you're testing. You are the tester. You just told them you were testing. They're not stupid.

But what exactly does that mean? Have you been confirming acceptance criteria are met? Have you been investigating how this story handles error scenarios? Have you tested from the perspective of each of the business user personas? Have you tried some simple penetration tests to determine whether this story has covered the basics of security?

Start making a conscious effort to be more specific. Take the opportunity in your stand up to verbally create an image in someones mind of the activities that you're undertaking. While you may not have time to tell the whole story, you can certainly share the blurb rather than the title alone.

Without this detail there's a good chance that what you do is a little bit of a mystery to your team. And if they don't really understand what you're doing, then it may be difficult for them to identify opportunities to collaborate with you or help to anticipate problems that could prevent you from completing a testing task.

Making testing visible is not just about changing the documents you produce. Take the time to prepare for your stand up so that you can briefly explain what you are actually doing. I'm sure that you are not "just testing".