How detailed should exploratory testing be?

I spotted this question in the Cambridge Lean Coffee topics that James Thomas collated in his blog. It's a question that I'm often asked, and I consistently use the same analogy in my response: the testing pendulum.

Imagine a pendulum at rest. The space in which the pendulum can swing is our test approach. At the left apex we are going too deep in our testing and at the right apex we are staying too shallow. Initially, the testing pendulum sits directly in the middle of these two extremes:


When a tester starts in a new organisation or a new project, we apply the first movement to our testing pendulum. Think of it as lifting the pendulum up to the highest point and letting go. The swing starts from the shallow side of the spectrum to reflect the limited knowledge that we have as we enter a new situation. As our experience deepens, so too does our testing.


"When given an initial push, [the pendulum] will swing back and forth at a constant amplitude. Real pendulums are subject to friction and air drag, so the amplitude of their swings declines." [Ref]


The skill in knowing how detailed testing should be is to recognise the indicators that tell you when the pendulum is at the top of its swing. You need to be able to identify when you've gone too deep or stayed too shallow, so that you can adjust your approach appropriately.

Indicators help us determine the position of our pendulum in the testing spectrum. I see three categories of indicator: bug count, team feedback and management feedback.

As a caveat, the zero problems in production measure may not apply in some industries. A web-based application may allow some user interface problems to be released where the economics of fixing these does not make sense, but a company that produces medical hardware may seek to release a product that they believe is perfect no matter how long it takes to test. Apply the lens of your own organisation.

Whether you're working in waterfall testing team or an agile delivery team, you are likely to receive feedback from those around you. Be open to those opinions and use them to adjust your behaviour.

On the point of colleagues doing testing, this is a particularly useful indicator in agile teams. In the extreme case, if no unit tests are being written and your developers are outsourcing their testing to you, or if the business trust you to do their user acceptance testing, then it's likely that you're testing too deeply. If you want to cultivate an environment with shared ownership of quality then you have to allow room for that to happen.

If your testing pendulum is sitting at a point in the spectrum where your team are unhappy, it's likely that your manager will have a direct conversation with you about your test approach.

If you're testing too much your manager will probably feel comfortable about telling you this directly. If your testing is too shallow, you might be asked for more detail about what you're testing, be questioned about bugs reported by users, or have to explain where you're spending your time.

Indicators are heuristics, not rules. They include subjective language, i.e. "many", "not many", "frequently" or "a lot", which will mean different things in different situations. As always, apply the context of your organisation to your decision making.

The indicators that I've described can be summarised by opposing statements that represent the extremes of the pendulum swing: 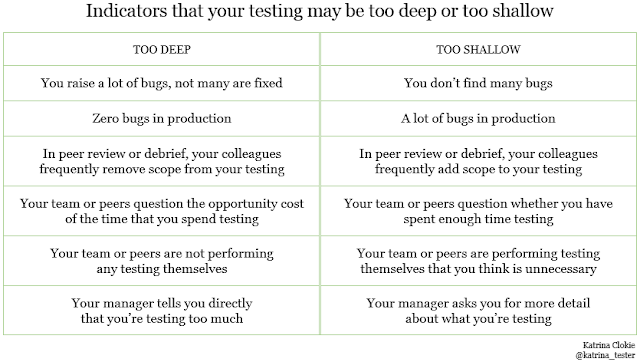 Eventually, most testers will end up at an equilibrium where the pendulum hangs at rest, halfway between the two extremes. The comfort of this can be problematic. Once we have confidence in our approach we can become blind to the need to adjust it.

I believe the state that we want to strive for lies slightly towards the left of the spectrum, or too deep. In order to keep a pendulum positioned off-center, we have to regularly apply small amounts of pressure: a bump!


If you've been testing a product for a long time and wish to avoid becoming stale, give your testing a bump towards greater depth. Apply some different test heuristics. Explore using different customer personas. Alter your test data. Any variation that could provide you with a fresh crop of problems to explore the validity of with your team.

You can use the outcome of a bump to calibrate your test approach within a smaller range of pendulum movement. Which changes are too much? Which are welcome and should be permanent added to your testing repertoire? Continued small experiments help to determine that you are in the right place.

The testing pendulum is a useful analogy for describing how to find balance in a test approach. When entering a new team or project, it can be used to illustrate how we experience large initial swings in the depth of our testing as we learn the indicators of our environment. For those who have been testing the same product for a while, it can remind us to continuously verify our approach through bumps.

There is no one right answer to "How detailed should exploratory testing be?", but I hope the testing pendulum will help you to determine and describe the right level of detail for you.